This season could yet be a positive one for Everton, but excitement is already building around what the Toffees could achieve next year.

The Merseysiders have impressed many neutrals this season, with Carlo Ancelotti building a fascinating team.

Impressive results against Tottenham Hotspur, Liverpool and Leicester City have signalled that Everton are ready to compete with the best. However, they still need a few signings to reach the next level.

Thankfully for Everton fans, the club have already been linked with several high-profile signings ahead of the summer transfer window.

We look at how the Toffees could line up in the Premier League next season.

Jordan Pickford will almost certainly take up the number one spot at Everton next season, but with Robin Olsen in reserve he may not be able to breathe easy.

The Swede is only on loan this season, but with Ancelotti admitting publicly they would like to sign the goalkeeper permanently, we foresee no issues with the club getting a deal done.

Everton have impressed defensively this season, with Ben Godfrey the standout across the back four.

Michael Keane and Yerry Mina have also been solid throughout the campaign, although they could come under threat next season.

Kalidou Koulibaly has been linked with a move to Everton this week and could usurp either of those players should a deal come to fruition.

Lucas Digne will keep his spot at left-back, having had another impressive season.

Changes are expected on the other flank. Jonjoe Kenny could leave having failed to impress, while Seamus Coleman is no longer at the level that Everton need to progress.

Max Aarons, Tariq Lamptey and Diogo Dalot have been linked, and we expect Aarons to be at Goodison Park next season.

Everton have a plethora of options in midfield, with little expected to change next season.

While Allan’s season has been somewhat blighted by injury, Abdoulaye Doucoure has impressed.

Tom Davies and Andre Gomes have also impressed at times during the campaign but could find themselves on the bench when Jean-Philippe Gbamin returns to full fitness.

As we explained in an article last week, Gbamin could be the key to unlocking Carlo Ancelotti’s perfect 4-3-3 system and could feature with Allan and Doucoure on either side of him next season.

While Everton could dive into the market for a new winger, a lot will depend on Ancelotti’s plans for James Rodriguez.

The Colombian has played on the right-wing 11 times this season, but also featured in central attacking midfield six times.

However, we expect James to be cutting in from the right next season, with Dominic Calvert-Lewin spearheading the attack and Richarlison off the left. 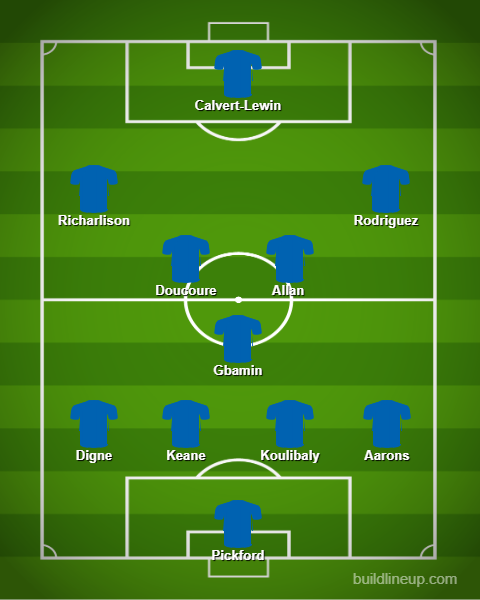